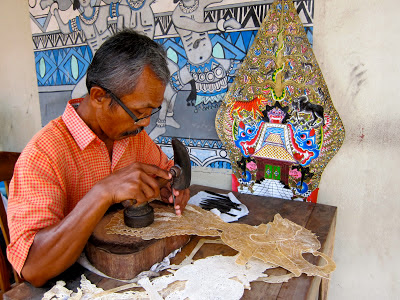 Yogyakarta in Central Java, is located to the East of Jakarta. The train journey took the entire day, but it was relaxing and I had already booked a return flight back to Jakarta where I would connect to Bangkok and Melbourne. 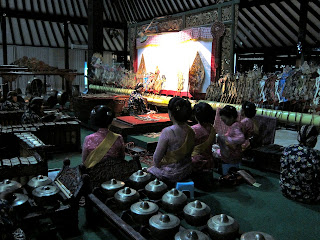 The Wayang Kulit (traditional Javanese shadow puppetry) performance was held at the Sonobudoyo Museum in Yogja. The Ramayana is divided into eight episodes, one performed each weekday evening.
The night I was there, they performed the second episode 'Hanoman's Mission'. It was quite a surreal experience with an audience of only half-a-dozen, but a cast of almost twenty performers, including twelve in the Gamelan orchestra, a choir of five women and the Dalang (puppeteer) performing the Kulit characters. 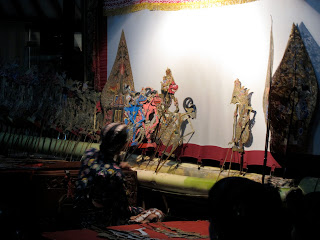 The action in Wayang Kulit is very slow and unless you are absolutely passionate about the art of traditional puppetry and have the whole night to relax and enjoy the spectacle, don't go! Most of the small audience ended up leaving before the end, but the tiny few who stayed really enjoyed this ancient traditional theatre. I also made a short film of the work, which is yet to be edited, so stay tuned.

While in Yogja, I was also lucky enough to attend a masked Ramayana Ballet, which was performed at the Prambanan Temple at night, which made a spectacular backdrop, being the largest Hindu temple of ancient Java.
Posted by Gary at 20:09