Back in the Land of Oz 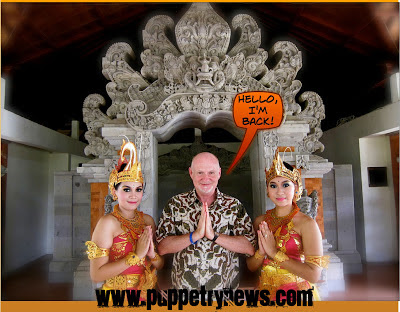 I am back! I humbly apologise to all of you out there for my extended absence from the Puppetry News Blog. It's a long story which I shall try to précis right now. It all began by planning another workshop - performance tour in SE Asia in October. This was soon followed by a family crisis in Jerusalem. So with tickets, suitcases and MacBook Pro in hand, we left Australia in early September - Israel bound.

To cut a long story short, soon after reaching Jerusalem, my MacBook slipped off the arm of a chair where I was working and my delicate hard drive suddenly died. I now had no laptop and there was no official Apple Store in Israel to repair it. I was instructed to take the computer into a Mac reseller in Jerusalem. Three weeks later, the day before we were leaving for Bangkok, I got the laptop back and after running it for fifteen minutes, it croaked again. So I was bound for a series of workshops in Jakarta, with no laptop or music.

I managed to get onto You Tube and downloaded enough music for the workshops and got them onto a CD. (Anyone remember those?) We finally arrived in Bangkok, where we all split up. My wife, our boys and my MacBook returned to Melbourne and I flew onto Jakarta, where a new adventure awaited me... I was invited to present workshops and performance at the ISTA Festival for Asian schools, which was held at the British International School in Jakarta.

During this time, I was also introduced to a very exciting recycling XS Project in Jakarta. The project makes use of street kids, who collect the garbage, separate the contents and sell it on to the NGO, who go on and produce bags, wallets and the like for both Indonesian and international sales. Besides visiting and filming the project, I was invited to give a special Creativity Workshop to the street kids, one of the highlights of my visit. I shall write more about this and my discoveries in Indonesia a little later, so keep your eyes open for more...
Posted by Gary at 12:20