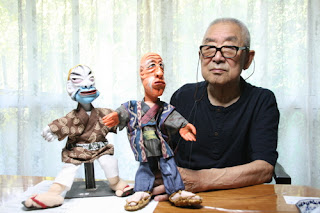 "I want to oppose war, even if it means putting my life on the line," said 86-year-old Tachio Miyahara, who saw many of his friends die as kamikaze pilots during World War II.

Miyahara, a former kamikaze fighter pilot himself during the war, is the head of a puppet theatre group based in the Tokyo city of Hachioji. Since the end of the war, he has made an effort to build friendship between Japan and China through theatre performances, driven by a burning desire to teach children what is right.

Miyahara aspired to become a pilot when he was young, and at the age of 15 he entered the Tachiarai Army Flight School in Fukuoka Prefecture. As he trained to become a fighter pilot, the army started hunting for kamikaze pilots. Pilots were handed a form and were told to mark it with a circle if they were willing to become a kamikaze pilot or a cross if they weren't. Those who wanted to add an explanation were told to draw a triangle. Miyahara drew a bold circle.

"Internally, of course I hated the idea, but there was no way I could mark down a cross," he recalls. Resolved to die fighting, he wrote a farewell note to his family.
Around this time, he saw a friend of his sneak out of his room at night, and followed him. After making his way onto the airstrip in the darkness, his friend wailed for his mother -- a scene Miyahara still cannot forget.

In May 1945 Miyahara's kamikaze team was formed, but the war ended without him flying an attack mission. Miyahara was so relieved that he threw the pilot's badge that he had worn on his chest into a pond.

After the war, Miyahara entered a performing art school to become an actor. He liked writing screenplays and in 1956 he founded a troupe named Dora. Miyahara later happened to see footage of a puppet play in China's Fujian province, and committed himself to puppet theatre. He learned how to operate puppets though written correspondence with a troupe in China, and in 1980, after diplomatic relations between Japan and China has been restored (in 1972), he visited Fujian province, traveling around elementary schools and other facilities giving performances over a period of 60 days. Since then, he has visited China every year with his wife Shizue to give performances.

Miyahara covers his stays in China out of his own pocket, and his plays there are free. "I want to show them to children, particularly those who have never seen them before," he says. At first some children were afraid when they found out he was Japanese, but Miyahara says that after watching the puppet plays, the children would rush to surround him. Their happy faces have encouraged him, and he believes that one day this will lead to peace.

At the end of his performances he often brings on stage a panda who fights the bad guy, depicted by a wolf.
"My mission is to convey the importance of sticking to what is right," he said. (Credit: The Mainichi, Japan & Gregoland)
Posted by Gary at 10:05