Sending a prayer for Jane Henson 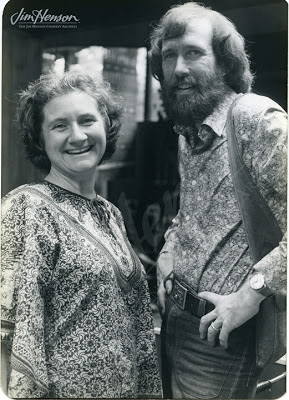 Jane Henson was diagnosed with cancer, and is now paralysed. Her daughter Cheryl has just reported "She is not doing well. Her spirit remains strong but her body has failed her. She can no longer take any nourishment. Please send a prayer for the beautiful and talented Jane Henson."

Jane Henson, born Jane Nebel, was the wife of Jim Henson from May 28, 1959 until his death in 1990. She is also the mother of Jim Henson's five children: Lisa, Cheryl, Brian, John, and Heather Henson.
Nebel and Henson met in a puppetry course at the University of Maryland, College Park, where they were both undergraduates. At the time, Nebel was a senior majoring in art education and Henson was a freshman studying to become a commercial artist. Nebel later became Henson's puppeteering partner on the television show Sam and Friends, and the two eventually married and the rest is history.

Please send a special payer for dearest Jane and her entire family!
Posted by Gary at 15:48