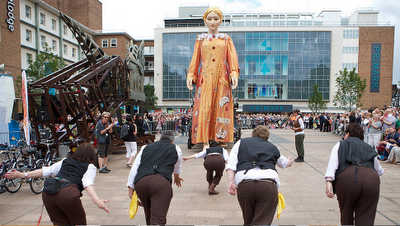 Godiva's journey to London tells the story of a six-metre-high puppet on a seven-day journey from Coventry to London as part of the 2012 Cultural Olympiad.

Lady Godiva, powered by a team of 100 cyclists, was met with a carnival procession in Walthamstow.  Waltham Forest Council Leader Chris Robbins received a Book of Intent, containing the hopes of young people from the West Midlands.  The Godiva puppet took two-and-a-half years to make. Godiva travelled 125 miles through Northampton, Milton Keynes, Luton, Hatfield and Waltham Abbey on the way to the capital.

She was propelled by 25 cyclists at a time who were seated on full-sized tricycles which are joined together in a structure called the Cyclopedia. Cyclopedia rider Keith Hirons, 65, a wheelchair user from Coventry, had a special hand-crank added to the tricycle so he could take part. He said there was an "electric atmosphere" and a "real buzz of excitement" after finishing the journey.

You can watch this epic journey on You Tube here and the promotional film for Imagineer Productions 'Godiva Awakes' project here and you can view the BBC report in pictures here.
(Thanks to Puppetvision)
Posted by Gary at 20:02