The work of Henk Boerwinkel revived

Fifty years of puppet theatre is celebrated in an exhibition of the work of master-puppeteer Henk Boerwinkel. Although this short film dates back to 2008, it celebrates the work of a unique puppet artist from Meppel in the Netherlands. Boerwinkel ran the Figurentheater Triangel for many decades before he retired, travelling the world showing his dark world through the silent eyes of his surreal characters.

In May 1984, Jim Henson interviewed Henk and his wife, Ans Boerwinkel, as part of his 'World of Puppetry' series, to gain a first-hand insite into his work. Boerwinkel’s work emphasized the visual and was related to themes of magical realism, integrating lighting and sound to create poetic moods. Using a combination of masks, marionettes, rod and hand puppets, their programs were full of surprising effects.  It's recorded in Jim's Red Book here! 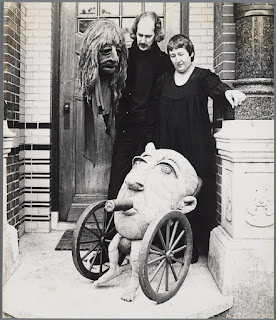 In May 1987, shortly before my courses with Jim Henson, I was lucky enough to be part of a month-long workshop with Henk Boerwinkel run at the Institute International de la Marionnette in Charleville-Mézières, France. This offered me a period of silent reflection on the power of the puppet to communicate without the use of language. This is something I've continued developing for myself both in my workshops and performances.

Although this short film of the exhibition (above) is in Dutch, it's certainly worth taking a look at the 170 characters that inhabited Boerwinkel's world. There's another fascinating film (2010) showing the making of his puppets and fragments of his short performances with an interview in Dutch here!
Posted by Gary at 11:03

Fantastic! I read the name before, but I don't remember seeing the work. Thank you for introducing me to this man's work! I love the characters, the textures, and the colors!

The first time I saw his show Triangel theatre was sometime in 1976 while at the Marionette theatre institute in Stockholm , Michael Meschkes school, there are two groups i have been moved and influenced by in my work, 1 Peter Shumans ,bread and puppet theatre and the other Henryk Boerwinkels work...:-)
Dadi