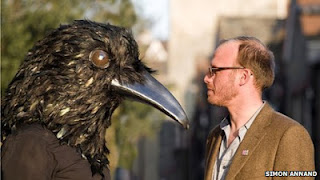 BBC News has just announced that the highly acclaimed Handspring Puppet Company is about to establish a UK arm, with a new production based on Ted Hughes' dark and mythical Crow poems.


The world premiere of Crow will be in July as part of the Greenwich and Docklands International Festival. It will be one of the artistic centrepieces of the London 2012 Festival. "Crow is full of muscular and visceral writing and that's what attracted us as people who make theatre out of bodies," said director Mervyn Millar.

The Handspring Puppet Company is best known for its work on the National Theatre's production of War Horse, first opened in 2007. By the end of 2012 there will be War Horse productions in London, New York, Toronto and Melbourne. The South African-based company has been performing for more than 30 years, but Crow is the first work from its sister company Handspring Puppet Company UK. Millar said the plan was to establish a permanent London base which would "become a centre of excellence for puppetry".

Crow will combine a variety of crow puppets with choreography from Ben Duke of Lost Dog dance company. "In War Horse we had to put a non-speaking animal at the centre of a narrative theatre piece," said Millar. "In this project we're aiming to find a new synthesis of poetry and dance and puppet theatre."

He added: "Most of the puppets are more in the style that people might recognise from War Horse, less naturalistic and with more attention to the skeleton than what's on the outside."
The construction of the full range of puppets is due to begin after more rehearsals next week. The production is recommended for a 14+ audience.
Posted by Gary at 20:57