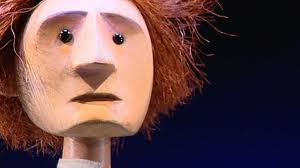 Former British puppeteer, Joe Wright has come of age. His parents, John and Lyndie, founded and ran Islington's famous Little Angel Theatre. Although John Wright (who was 65 when Joe was born and died in 1991) could be distant, for Joe and his sister Sarah childhood was a creative whirl of making puppets and making up stories for them.

Since leaving the puppets behind, Joe has gone on to make a career for himself as a successful Hollywood director. Although claiming to be an undiagnosed dyslexic at school, Joe's first feature film, Pride and Prejudice, earned four Oscar nominations; his second, Atonement, collected six; his third, The Soloist, based on the true story of a homeless violinist, was less successful.

Joe, who is married to Sitarist Anoushka Shankar, Ravi Shankar's daughter, discusses his life and influence growing up performing with his parents at the Little Angel Theatre in a new BBC Television report here!  This year also happens to mark the 50th anniversary of the Little Angel. You can read my previous post about this and the Suspense Puppet Festival, which I attended recently in London, here!