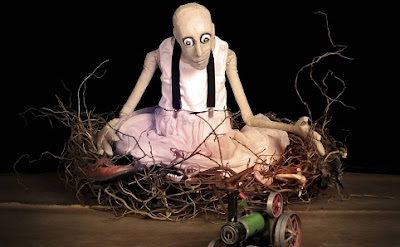 The theme of this year's Suspense Festival in London was 'Politics and Puppetry', although not every performance was overtly political. The centre of the action of the eleven different venues was the Little Angel Theatre in Islington and it's director, Peter Glanville has been running this bi-annual festival since 2009.
This year also happens to be the fiftieth anniversary of the Little Angel Theatre, which was founded by South African puppeteer, John Wright in 1961. Watch the BBC clip here!

On Saturday I saw a charming new production of Plucked.. a true fairytale, by Invisible Thread (formerly Faulty Optic) at the Little Angel. Plucked looks at the roles of older women in myth and fairy tale and combines some expressive large bunraku-style puppets.

Last night was the festival climax with the puppet Grinder Cabaret at the Jackson's Lane Theatre. The show was compared by the hilarious Nina Conti. Nina is one of the world greatest ventriloquists and certainly top in the UK. Here's a clip of Nina at the Melbourne comedy festival last year. Meeting up after the show, she was still carrying her 'Monk' and was rushing off to get a plane for a gig in New York today. Other great cabaret acts were 'Clementine the Living Fashion Doll' and Blind Summit. You can catch their short performance here!

My few days at the Suspense Festival were certainly a highlight and I'd recommend everyone to keep a lookout for their next edition in 2013.
Posted by Gary at 22:22