The puppet, a tool for propaganda 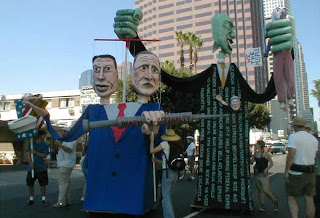 Meeting in Gadagne Politically Incorrect
Contrary to the popular view that the puppet is essentially dissident and subversive, during the course of history, the puppet has often been a fantastic tool for propaganda, an object manipulated in order in turn to manipulate minds, spreading education, values and ideologies.

The French Institute of International Puppet Theatre are organising a one-day event during which academics and artists will exchange ideas around the emblematic scenarios of this little-known history: puppets used for evangelization, puppets taking sides during times of war (for example the Spanish Civil War), puppets serving the state (Soviet propaganda tool in Poland), puppets as mouthpieces for assertions of identity (colonialism for example).

Continuing the discussions from the last edition of Scène des Chercheurs, an analysis will be made as to what has made the puppet, as object and in performance, a particularly fertile medium for use in propaganda.

After the professional encounters in Clichy on the theme "Orders, communication, propaganda", this day will mark a new landmark in the cycle of research "Puppets/ Censure, Propaganda, Resistance" which will terminate with the organization at the end of November 2014 of an international colloquium devoted to the relationship between puppets and religious, political and economic power.

The Meeting is being held in Lyon, France on Monday 15 April 2013 (from 9.30am to 5.30pm) at the Musée Gadagne, World Puppet Museum. If you shall be anywhere near Lyon on 15 April, make sure to attend.

Related to this dialogue on Politically Incorrect Puppetry, there an interesting article on the History of Radical Puppetry.
Posted by Gary at 23:15