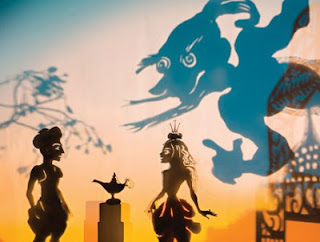 Animations Online has evolved over many years from the first publication of the British Puppet Centre magazine 'Animations'.  I believe that Penny Francis was its first editor in 1974.  With funding for the Arts drying up in the UK, like everywhere else in the world, the publication slowly evolved into becoming both online and free, which is of great benefit to puppeteers around the world.

Here are some of the articles covered in the latest edition of Animations Online:
Puppetry and Opera was a two day event over 9-10 November 2012, hosted by the Puppet Centre and held at the Barbican and Central School for Speech and Drama.  "Puppetry and opera are self-conscious art forms where the fact of performing is declared. It is their collusion with the viewer, their joint celebration of skill, craft and high artifice, that make puppetry and opera such close companions."

The SPILL Festival of Performance 2012 – established in London in 2007 under the direction of Robert Pacitti and situated in Pacitti’s home town of Ipswich for the first time this year – occasions this comparative meditation about the uses and abuses of objects and performance’s material remains. SPILL is best known for its national platform for emerging artists and companies. SPILL will now come to London during April 2013.

London International Animation Festival in late-October, featured an exciting and intriguing collection of animated films from around the world. It’s the UK’s largest festival of its kind, with 280 films from 30 countries and 10 competitive categories, featuring the whole spectrum of creative animation. Check out this great puppetry publication online here.
Posted by Gary at 23:10