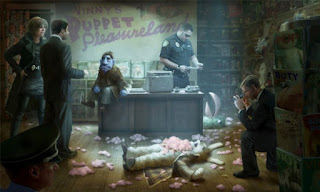 "In a world where puppets co-exist with humans as second class citizens, puppet private eye and disgraced ex-cop, Phil Phillips, is hot on the trail of the serial killer who murdered his brother and is now targeting the cast members of the famous 80s television show, 'The Happytime Gang.' As the killings continue, Phil’s former flame, Jenny, is next on the list. It’s up to Phil and his ex-partner, Detective Edwards, to find the culprit, but as bad blood and old resentments resurface the clues start pointing to the only viable suspect, Phil himself. Now he’s on the run with only his wits and hard headed determination, as he tries to solve, 'The Happytime Murders'.”

The Happytime Murders, a movie about a world where puppets and humans co-exist and a puppet detective must solve a murder (think a Muppets version of Who Framed Roger Rabbit?).  It's no longer an original concept, but it's the return of 'The Henson Muppets'- this time in a non-Muppet movie, cause the Muppets are now officially owned by Disney. But a puppet starring as 'a private eye' might be something you think you might have seen before? That might well be, because just a few short years back, Australian comedian, Jon Williams, made a short film based on this very concept. 'Soft Cop' told the story of a private eye that get's caught up in a series of suspicious murders, much like the Henson's concept above. (Check it out here!)

The film is set to be directed by Brian Henson, the son of Muppets founder Jim Henson, and produced by Henson studios. Henson directed Muppet Treasure Island and a Muppet Christmas Carol. The script is by Kung Fu Panda scribe Todd Berger. Katherine Heigl is attached to star.
Posted by Gary at 08:33