Special FXs Muppets or not?


Do the special effects in the new 'Muppet Movie' make the movie or make it like all the other movies released in recent years?

We finally got to see the new Muppet Movie this week with our (almost) three-year old boy. He loved it, although he did get a little restless towards the end. However we're not discussing a small child's 'sitting-power' during the movie, but rather if the movie was really enhanced and enriched by the power of modern technology used by Disney?  In the old days of The Muppets (the nineteen-eighties), Jim Henson combined so many simple puppetry techniques to achieve a really simple but effective end result. Remember Kermit riding the bicycle in the first Muppet Movie? (See the photo of Henson manipulating the close-up Kermit) 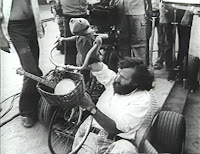 In addition to the marionette used in long shots, a Kermit hand puppet was used in close-ups, where it was operated by Jim Henson from a low-rolling dolly. The two types of shots were inter-cut repeatedly to enhance the illusion.

So my question is 'have the Muppets really improved with all our new technology or did the original characters, with all their flaws have more personality' as they broke through many barriers in order to convince their audience of their 'reality'?
(Our thanks to PuppetVision Blog for the alert)
Posted by Gary at 16:11

This kind of thing happens all the time, and there is no stopping it. If this movie is lucrative, then you'd better believe the next film (maybe they'll wait until the third) will indeed feature CG muppets.

The narator says: New tools to make them more magical than ever.

I'm not opposed to using new technologies to create new things, but I think old techniques make things more magical.
Creating the original Muppet movie used the same techniques that would have been used on the live stage, that have been used by puppeteers and magicians for literally hundreds of years, it used techniques that require development of old-world skills that are disappearing from the world.

Those skills are magical - I can create realistic digital effects on my laptop using free software, but creating a loveable, banjo-playing frog is something that takes years of dedication to an artform.

As I said, I'm not opposed to using new technologies to create something new, but when something is crafted from a time-honored, old-world artform, I think it's worth the extra time to maintain its integrity - and its magic.