Puppets show the way in Portugal 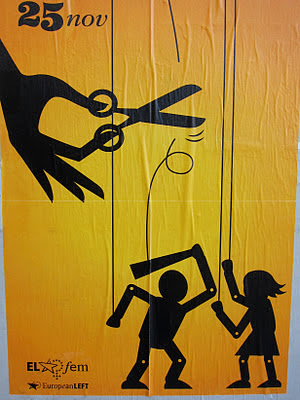 I am now safely back home in Australia. I flew out of Lisbon in the nick of time. Soon after leaving, the airport, along with all social services closed down for a 24-hour strike as Portugal struggles against proposed austerity measures.  The strike was followed closely by today's United Nations International Day for the Elimination of Violence Against Women.
I had a great three-week European lecture and workshop tour and belief in the power this work has on an international audience has been strongly reinforced. The next conference where we're demonstrating the power of puppetry in communication is the Drama Victoria Conference in Melbourne on 1-2 December.
Posted by Gary at 13:20