TV Puppetry from a Norway Fjord 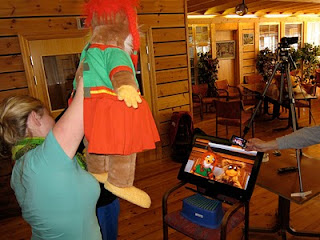 When I was invited, late last year, to spend a week teaching television puppetry to a group of enthusiastic puppeteers in Kinsarvik, a tiny town in the fjords of western Norway, I keenly accepted and planned this into our European Workshop Tour for 2010. Last weekend we flew from Toulouse in southern France, via Paris and Oslo to Bergen, which took an entire day. We were picked up in Bergen by our host from a small theme park, Mikkelparken and Hardangertun holiday resort and driven the three-hours north-east to Kinsarvik in the land where the sun set at eleven at night. Mikkelparken had a set of great puppet characters developed and these were performed at the theme park in summer. My task was to assist them in developing this project for eventual television broadcast and to improve the professionalism of their live performances. It was fascinating listening to the folktales they had developed and brainstorming how these could be transformed to the small screen. Kinsarvik (with a population of 459) is the most idyllic place to work and holiday. Our week in Kinsarvik was fantastic. We are now in Bergen for two days, before we fly to London. Stay tuned for more!
Posted by Gary at 02:48