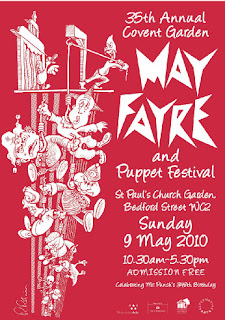 In a previous article I wrote in 2005, I recalled my participation in the 325th anniversary of Punch and Judy in Covent Garden, London in 1987. This year on 9 May, the 348th birthday of Mr Punch will be celebrated. It's been so long since the days that Punch and Judy professors, as they are called, roamed the streets of England using their puppets to criticise the powers of the state. Entertainment was, of course, part of the deal, but sadly the political clout of the puppet has all but disappeared.

But if you are around London in early May, do visit the professors strutting their Punches in Covert Garden. Sadly, we will only be in London a little later in May.
Posted by Gary at 17:14