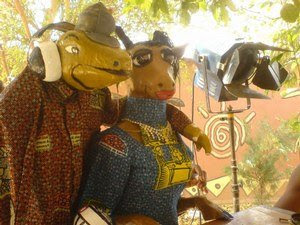 The show, which is hosted by two animal puppets, stars two puppet characters: Chevrina, "a seductive female goat reporter, and her sidekick Margouillat, a lizard, provides viewers of Burkina Faso’s national television channel with monthly information on market prices for livestock and grain, in addition to discussing various topics with guests invited to participate in the broadcasts.

According to the organisers, the idea behind the show is to bring rural reality home to the Burkinabe public. The intended audience are farmers and those involved in the agricultural and livestock marketplace, but the show is also applicable to the general public as well as policymakers and donors. You can view examples of the TV show (in French) here and here!