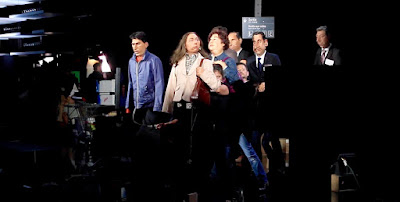 Part Two of my Journey - Europe

From Istanbul, I flew to Paris to continue my exploration of 'Les Guignols de L'Info', the story behind the Canal + daily puppet satire, which I started shooting a year ago. As you are well aware, the past year's events in Paris have been crazy, starting with the Charlie Hebdo massacre. More recently Canal + was purchased by French billionaire, Vincent Bolloré, a close friend of Nicolas Sarkozy.

Since taking over, Mr Bolloré has let it be known that he wanted to abolish the nightly 'Les Guignols' because he did not like “mockery”. He began by firing the Guignols' three head writers and appointed new 'secret' writers of his own choosing. Now the show has been schedule to re-open on 14 December, but the show will now be screened during 'encrypted time', whereas over the past 26 years, since the broadcast began, it has been shown before the 8 o'clock news in 'open-time'.

Last year I interviewed Bruno Gaccio, the original co-producer of Les Guignols series and was hoping to re-interview him on the dramatic changes taken place in France, but due to the drama in Canal + impending new 'censorship laws, this was not to be. However, I did interview two others involved in the series, who were at more liberty to speak out about the recent events.
​
From Paris, I flew to Berlin, to continue my interviews and coverage for my film. Thereafter I travelled to Belfast and Derry to get the backstory behind a fascinating theatrical performance and documentary film on Theatre of Witness at The Derry Playhouse.

In South Africa, two years ago, I interviewed puppeteer and director, Aja Marneweck, about her work with Theatre of Witness in Northern Ireland. Aja was involved in 'Release', a production in which five men tell their stories of war and devastation in the troubles in Belfast and Derry. After her powerful work with these men, using paper puppets to help their story, I realised that I would have to go and find out more about these men and their stories for myself. In Belfast I met Paddy McCoey, the performer/puppeteer in the show, who took me on a journey through Belfast and Derry explaining the political situation and how it related directly to their stories.

I later flew back to Berlin to meet up with Jameel, a theatre director from Aleppo in Syria. Jameel produced three powerful series of highly courageous online hand puppet performances on You Tube, 'Top Goon', reflecting the political crisis in Syria today.
​
Given the cruelty the Syrian people face in their struggle for freedom, satire and black comedy allow them to voice the collective pain and grief while expressing their ultimate determination to live.

Since the very beginning of the uprising, Masasit Mati’s show has mocked Bashar al-Assad, portraying him not as a bloody dictator, but rather as childish, often insane, a puppet figure suitable for ridicule. They have sought to strip the carefully crafted image of the dictator as a god. But Assad is not the only target. All aspects of the Syrian revolution are examined and satirised, including the political and armed opposition.

So these were just a few of the stories I discovered and filmed during my almost two-month adventure in the Middle East and Europe. I do believe the shooting is finally completed. If you would like to hear more and eventually view the film, you'll have to keep posted to this blog.
Posted by Gary at 16:58