A Tribute to Nelson Mandela


Nelson Rolihlahla Mandela has finally left us today, at the age of ninety-five! South Africans and the entire world will never forget this man!  He was born to a noble family on 18 July 1918 in a little village in the Eastern Cape in South Africa. In later years he became known by his clan name, Madiba. Given the forename Rolihlahla, a Xhosa term colloquially meaning "troublemaker", he went on to become the thorn in the side of the minority Apartheid South African Government, who imprisoned him for 27 years. 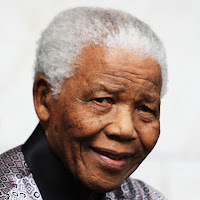 Finally upon his release from prison, he quickly took charge of the deteriating social and political situation and was elected as President in the first democratic election ever held in South Africa. In 1994, in the lead up to the first democratic election in South Africa, I had the rare privilege of interviewing Madiba in the lead up to the election. You can view the video clip here!

Mandela, who became South Africa's first president in 1994, celebrated his 95th birthday on 18 July 2013. Within South Africa, he was widely considered to be "the father of the nation" and "the founding father of democracy", being seen as "the national liberator, the saviour, its Washington and Lincoln rolled into one." He was an extraordinary warm down-to-earth human being, who made everyone in his presence feel special. Madiba, we salute you and the world will never forget the dream you achieved in your remarkable life.
Posted by Gary at 09:07