In November 2011, as armed conflict raged in Syria, a young acting troupe called Masasit Mati launched a ground-breaking, finger-puppet show: Top Goon: Diaries of a Little Dictator, which mocks the Syrian regime in ways never seen in public before. Living in exile, the four actors in Masasit Mati broadcast their show online, attracting a growing audience and positive reviews around the world. But Top Goon's success puts the actors themselves in danger and the widening split in Syria between those who favour a peaceful resolution and those prepared to use armed force mirrors that within the troupe itself. Lead writer Arwa is determined to stick to his message of non-violent resistance. The show's actors, the Malas Brothers, support the Free Syrian Army and are increasingly vocal in their demands for violent revenge upon the regime. Jameel, the show's director, struggles to reconcile these diametrically opposing viewpoints while trying to raise funds to get a second series off the ground. A remarkable film that explores the conflicts besetting millions of ordinary Syrians as their country edges into bloody civil war. 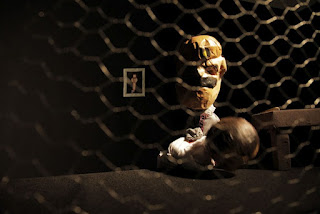 A final recurring theme of "Top Goon" is the lie. Since maintaining a repressive regime can not go without concealing the truth, the series describes the media rhetoric official Syrian TV (Episode 3).  This important work can be found on their You Tube Channel and on Vimeo here.
(Credit: Aljazeera)
Posted by Gary at 08:39