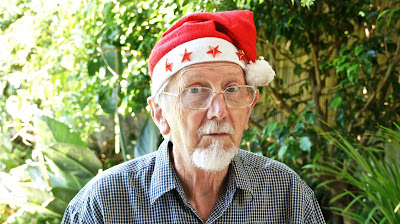 A serious looking 'Santa' alias Richard Bradshaw came for breakfast this morning with his charming wife Margaret, just in time to celebrate his seventy-third birthday in Sydney.
For those who don't know Richard, he is Australia's Master of the shadow puppet and our walking encyclopedia of world puppetry.

Jim Henson made a documentary of Richard's work back in 1985. You can watch an extract of that here! In 1986, Richard received the Order of Australia, an honour bestowed to him for his great service to Australia through puppetry, which he is still engaged in full-time. I believe Richard is best known for 'The Marionette Theatre of Australia'.  Richard became it's artistic director in 1976 until 1983. You can also watch Richard's most recognised musical piece 'Super Kangeroo' here.

On behalf Puppetry News, I'd like to wish Richard a wonderful birthday for today and an inspiring year ahead for 2012.
Posted by Gary at 19:38