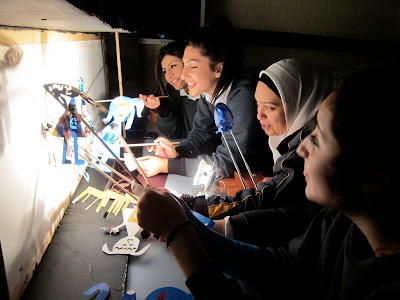 For our Artist in Schools 2011 program we adapted the course from our 'Looking for a Monster' project, which I'd been working on for many years. For some time, we'd been thinking of launching a school's program based on the 'Monster' project but we first needed to run a pilot program to see how it would work in both primary and high schools. So we chose Curl Curl North Public School (primary) and Strathfield South High School to run the ten-week pilot.

The main student work was done using shadow puppetry and the results have been documented for you to watch. You can view the Making of the High School program here and the High School Shadow Performances here. The Primary School Program documentary can be seen here.

We used the puppet play and poetry by the young Czech writer, Hanus Hachenburg, as a springboard for students to start observing and reflecting upon themselves, their community and greater world around them. The overall themes were becoming 'Every-day Heroes' as well as 'Using the Arts to Change the World'.

We began the ten-week project with simple ‘World of Paper’ exercises, in which the students had to portray their heroes or famous people they respect by building them out of brown paper and bringing them to life. This was followed by students developing their own stories, with messages which they wanted to share with the world. Some of the students developed Identity poems or used historical figures or events, which they brought to life using shadow puppetry.


“ When the students came up with their stories and engaged in the creative process, what they produced and what I think they learnt from the whole ten-week program was quite amazing. I felt that the students achieved something really special. I don’t think I’ve ever seen this group of children do something to such a high level.


In terms of the stories themselves, the messages were so powerful, for example ‘Rabbit Proof Fence’ and the story of Nelson Mandela’s life, which were very important stories to tell. To have done them in a typical classroom format could have worked, but I believe this is a way they will remember, because the whole process was creatively scaffolded. I think that Gary’s involvement in facilitating that scaffolding was crucial. The high level of the shadow puppet plays produced was very unique, because although children are often able to play and create, they seldom have the expertise that was provided by the artist in residence programme.


One of the most powerful things we achieved was the integration of basic skills. For example – I was listening to one of the students, who had previously struggled with the whole literacy process, telling the story from the perspective of her character and her telling of the story was now actually outstanding."
Jan Warhurst, Deputy-Principal, Curl Curl North Public School, NSW, Australia
Posted by Gary at 21:21