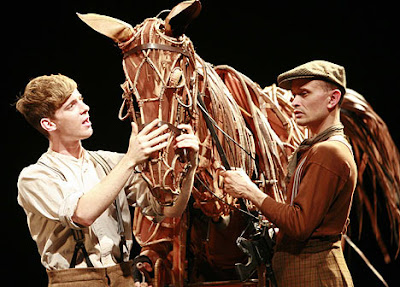 According to Janni Younge of Handspring in Cape Town, South Africa, their acceptance speech went something like this:
"People ask why they have such an emotional response to this play about a horse made of cane and aluminum. After thousands of years of our dependence on the horse, the First World War ushered in the modern era and we lost forever the horse in our lives. It is that story that Tom Morris so fortuitously recognized in Micheal Morpurgo’s ‘Warhorse’ and its possibly that immeasurable sense of loss that makes this play about horses so emotional.

The people at Handspring who have made this award to us possible, are the team who build the horses in Cape Town led by Thys Stander and the incredible puppeteers here in New York, who, under the guidance of Mervyn Millar, perform this feat night after night.  We feel so lucky to have been part of such a fantastic creative team and that Nick Starr and the National Theatre put so much trust in what must have seemed a crazy idea at the time. Thank you Broadway League and American Theatre Wing for honouring puppetry with this special award." You can watch the BBC clip here. Here's the report from the BBC!
This is a major triumph for world puppetry and as part of that world and a friend of Handspring, I am extremely proud.
Posted by Gary at 20:50

I'm thrilled they won som any! Yet, seeing the articles and footage from the Tonys, I detect that people are a little uncomfortable with this, as they seem to quickly mention the win and move on to something else. Paranoia on my part?