Looking for a Monster brought back to life 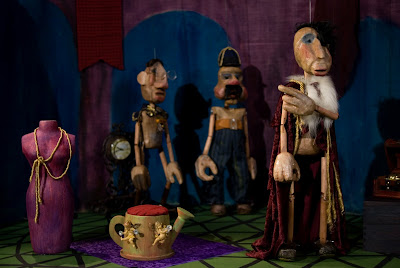 I really don't believe in coincidence. Why? You might well ask? Many of you might know that much of the last decade I have spent in the research and development of a extraordinary puppetry project, based on the life of a thirteen-year old poet in Czechoslovakia. This talented boy wrote a puppet play, while interned in a concentration camp during the Second World War.

To cut a long story short, we have finally developed the project into a school-based educational program. This we are piloting in two Sydney schools starting tomorrow. Yesterday while surfing the post-Royal Wedding comments on Face Book, I stumbled across an article about Holocaust Remembrance Day which I discovered just happens to fall on Monday 2 May 2011 - the very day we launch the new project.

Our project gives an insight into the clandestine children's magazine, Vedem (In the Lead) published by the young boys in room L417 of the children's home in Terezin between 1942 to 1944. Sixty years on, we are bringing this work to life in Australian schools, not as a Holocaust story, but as a universal story highlighting the themes of empathy, multi-cultural tolerance and the use of the Arts to change the world.