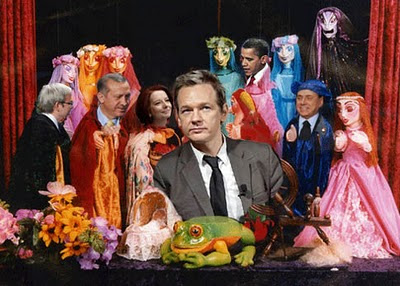 During the past months, WikiLeaks have been targeted by the US government and more recently many other country's condemnation of the whistle-blowing website which landed it's director, Julian Assange in hot water. But let's look at Assange, who comes from a family of puppeteers.

Today I spoke to his mother, Christine Assange, who runs the Fairytale Puppet Theatre in Queensland. She told me about Julian growing up with his roots in theatre and masks, even in the days before she embarked on her puppetry journey. While growing up in Australia, both Julian and his father used mask and theatre as a means of making social comment. It seems like this must have had a profound influence on his later choice of career, in which he developed his social commentary into the infamous whistleblowing website WikiLeaks. 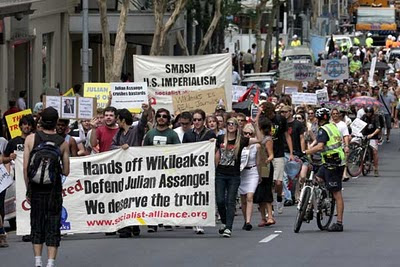 But what is it about puppeteers that drive them to become involved in social and political commentary in our world. The truth is this tradition goes way back. In eighteenth century England, actor, writer and puppeteer Samuel Foote took his traditional Punch and Judy Show onto the streets of London to critique the British Monarchy, after actors criticizing the monarchy had been banned. When the police came to arrest him, he calmly stated "It wasn't I that said a word, it was these puppets here that should be arrested!"

This tradition has continued to our very day when puppeteers throughout the world have brought their puppets onto the streets to comment or critise the regime, as I even did during those dark days of Apartheid in South Africa. United States puppetry troupe 'Bread and Puppet'
and the British television series in the nineteen-eighties, 'Spitting Image' both used their media to criticise and protest against the government of the day.

In 2005, see my post here, a British Punch and Judy man was banned from using Saddam Hussein and Osama Bin Laden puppets in his Kent seaside show in England and in 2004, see my post here,  during George W Bush’s re-inauguration campaign puppetry was banned in the United States. Now what does that say?

Meanwhile, Mr Assange remains remanded in custody in Britain pending proceedings to extradite him to Sweden to face sex crime allegations. Revelations embarrassing to governments all over the world, divined from the hundreds of thousands of US State Department cables leaked by Mr Assange, continue to be published by media organisations internationally.
Posted by Gary at 20:59

Greetings Gary, from Queensland.
When I read about the travelling lives of the Assanges I had to write a justice poem, with Puppets in it - having retired from the physical act, once a puppeteer.......
My contribution at:
www.myspace.com/jewelsescape/blog

Now I can read the rest of yours!

Interesting connections! Much to think about.