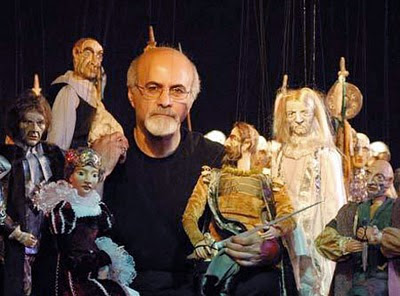 Iranian Playwright, director and Master Puppeteer, Behrooz Gharibpour has been invited by Tbilisi State University in the Georgian Republic to hold a ten-day master class from 24 January 2011, according to our sources at the Tehran Times.  Gharibpour will discuss methods of staging puppet opera and discuss his Aran Puppet Theatre's opera performance of 'Rustam and Sohrab'.

“There are many experts on puppetry in Georgia, but due to the lack of skills in staging opera puppet in the country, they have invited me to share my experience with them,” Gharibpour explained.
In addition, he shall assess the potential of Georgian artists in performing puppet shows. He plans to use his puppets and the films of the shows he has previously directed in the master classes.

According to Gharibpour, “Rustam and Sohrab” was warmly received by Georgian theatergoers and the Georgian press gave wide coverage to the opera puppet show during the Tbilisi Festival of Theater.
Gharibpour has previously staged the opera puppet shows “Macbeth”, “Ashura” and “Rumi” in Iran and internationally.  For those who weren't aware UNIMA Iran is said to have the highest membership of any of UNIMA's 64 member countries, which shows the popularity of the puppetry art in Iran.
Posted by Gary at 14:16