Feist does more with puppets! 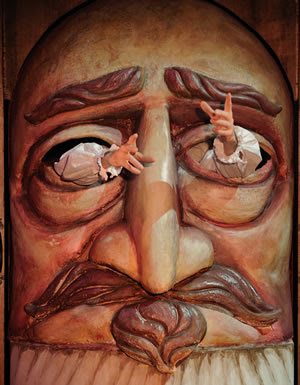 I remember so well Feist's debut into the puppetry scene, when in 2008, she was first featured on Sesame Street with her hit song '1, 2, 3, 4'.
Now the pop icon has a new music video out. Honey Honey sung by Feist, features puppetry by the Old Trout Puppet Workshop from Calgary, Canada.

The Banff Centre, in collaboration with the Old Trout Puppet Workshop, is offering a two-week exploration into the creative art of puppet theatre from 26 December to 11 January 2011.

The Old Trouts are a company founded on the collaborative nature of ensemble-based creation, they build their shows through a process of consensus, which shall be the thesis of this workshop. Over the 17-day period of the workshop, participants will explore exercises that identify the physical awareness and synchronicity of an ensemble, as well as participate in an arena of debate and building that facilitates an effective sharing of ideas. These exercises will in turn support the foundation of original, theatrical, puppet performances to be developed in the subsequent part of the workshop. The Banff Puppet Theatre Intensive will address elements of design (both set and puppet), scripting the silent narrative, collaborative directing, and manipulation of puppets.

Participants will create individual puppets, engage in small ensembles, and, in the nature of collective creation, create short experimental projects to be presented publicly. The workshop shall launch forth from the position that there are no right or wrong answers, but rather, through conversation and execution, that there is a way to discover the most inspired and effective solutions. The Banff Puppet Theatre Intensive is open to puppeteers, actors, dancers, directors, designers, teachers, visual artists, writers, and anyone with a willing spirit. To apply, contact The Banff Centre here!
Posted by Gary at 22:30