Katy Perry gives up Sesame Street for The Simpsons 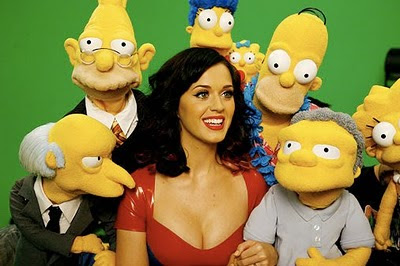 “In the wake of Elmo’s terrible betrayal, the Simpsons puppets wish to announce they stand felt-shoulder-to-shoulder with Katy Perry,” quipped series executive producer Al Jean in a statement to EW.com. Not only does the singer wind up leading Homer & amp; Co. in a rendition of “The 39 Days of Christmas,” she plays the unlikely role of… Moe’s girlfriend! Yes, from Elmo to Moe she goes. (And as you can see in the picture above, her sartorial selection for this gig probably wouldn’t have been Street-approved either: The PBS show announced on 23 September that it wouldn’t air Perry’s performance after previewing it on You Tube and receiving complaints about her cleavage-revealing outfit. By the way, her Simpsons bit was shot in mid-September, prior to the fuss.) Perry, the musical guest on Saturday Night Live tonight, won’t be the only celebrity gracing this Simpsons episode; Martha Stewart also pops up, but in cartoon form. “The Fight Before Christmas” airs 5 December on Fox.

Our thanks to California-based Puppet 101
Posted by Gary at 12:18