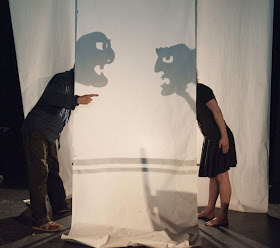 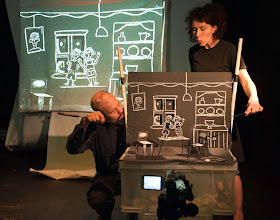 The production opens with the creation of Jack, a puppet drawn in chalk which magically comes to life, and the discovery of some beans that are, of course, also made from chalk. At first, this appears to be the familiar tale of Jack and the Bean Stalk but soon it becomes apparent that there is a twist to the tale. Jack kills Blunderbog Cormoran, the giant at the top of the beanstalk, and begins a quest to rid England of giants. A fun, fast and furious tale ensues with Jack slaying giants across the land. However, is Jack the hero of the day? Blunderbog’s distraught wife and a wonderfully sensitive narrative leave the audience to decide.
The new production combines chalk together with shadow puppetry, a toy theatre, rod puppets, pre-recorded and live film, to give a cutting-edge contemporary performance of a traditional tale steeped in legend and imbued with a sense of England’s past. Guyanese-born poet, John Agard, has been specially commissioned to write a collection of narrative poems, dialogues and scenes, which are threaded through the story and add another layer of richness to the show. The Chalk Giants is beautifully augmented with music by Jonathan Lambert. The folk-influenced musical accompaniment adds vibrancy and an additional dimension to the production. Jonathan performs his compositions on clarinet, bamboo flute, and appropriately, a xylophone made from stone. Ancient lithophone sounds from a cave at Skiddaw in the Lake District are woven in and there are songs ideal for audience participation.
The production will also perform at the Edinburgh Festival next month. Wish I could be there! For details check here!
Gary at 17:37