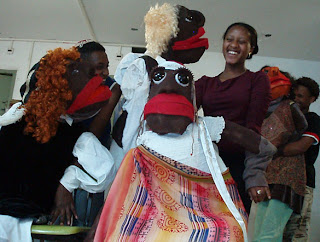 I almost forgot to mention an exciting new initiative starting in Northern Israel by a drama therapist in Kiryat Shmona. Nira Kaplanski and colleagues have started a series of workshops with emigrant Ethiopian communities using puppetry in Playback Theatre. I was most taken by the group, who had never previously been exposed to theatre or performance of any type. Although they were a really introvert bunch, which is completely understandable in a new country amongst strangers - the moment they put the puppets on, they seemed to forget their inhibitions and creatively express their inner most thoughts to their peers.

I first encountered Playback Theatre, while in Cape Town and conducting workshops for the Bonfire Theatre, who use Playback to enable communities to tell their stories. I taught them how to incorporate puppetry and objects into their special work.

Jonathan Fox, the founder of Playback Theatre, describes Playback as creativity, integrity and a willingness to truly work together. "We do it to use our bodies. We do it to tell our stories. And there's something more - we do it to make it possible for others to tell their story and to make the world a more peaceful place."

In an article by Hannah Fox, published in the Interplay Journal in May 2005, she talks about the objectives of her Playback Theatre group in New York:
"We identified four objectives for the project: to make space for recent, struggling immigrants to tell stories and receive support; to use the series of performances as a way to honor the bustling multi-culturalism of our city; to use the venue as a means to expose our work to the general public; and to honor the journeys of our own parents, grandparents and great-grandparents."

Please add the following excerpt about Puppet Playback Theatre. I may be the originator of the name of this technique. Maybe others who are doing some form of Playback Theatre with puppets can let us know.
Thanks,
Matthew Bernier
Norfolk, VA, USA

Puppet Playback Theatre is an adaptation of Playback Theatre (Fox, 1986; Salas, 1993/1996) which is a form of psychodramatic improvisational theatre, created in 1975 by Jonathan Fox and the original Playback Theatre Company. In Playback Theatre, audience members are invited to tell stories from their lives and to watch them enacted on the spot by playback performers using sound, music, movement, and improvisational drama. Playback Theatre can be entertaining, educational, and therapeutic. It affirms the importance of personal and universal experiences and provides opportunities for viewing life from new perspectives.
Sometimes, Playback Theatre companies use puppets or found objects as puppets in their work instead of the actors acting out the story. According to Salas (1993/1996),
In this imaginative, ritual context, we can readily endow household objects with human characteristics, just as small children do in their play. In a Playback performance, a scene done with “puppets” instead of visible actors can provide theatrical variety. It is an opportunity for a different kind of expression and response. Anything can serve as a puppet. Instead of coming prepared with objects, you can involve the audience in finding objects around the room – a plant, a shoe, a ruler. (p. 41)
This technique, most commonly called object puppetry or object theatre, has many rich therapeutic possibilities.
In my own work as an art therapist, especially with victims of domestic violence and/or child abuse, I have experimented with using puppets instead of actors in Playback Theatre, incorporating the evocative symbolic expression of puppets and animated objects as well as techniques unique to puppetry. Usually, the therapy group members take turns as storytellers, audience, and puppeteers/actors using ready-made puppets, their own puppets made in art therapy, original puppets “orphaned” by previous group members, masks, or found objects. An alternate method is for the therapist to solo perform or “playback” the story with puppets or objects. In either case, the therapist serves as the conductor, facilitating the storytelling, the performance, and group discussion processes.
In clinical settings, Puppet Playback Theatre can be added as a technique in creative arts therapies (art, music, drama, dance/movement, and poetry therapies) practice. In addition to attending to the general goals of therapy, Puppet Playback Theatre can be utilized to foster spontaneous and authentic expression as well as to facilitate communication between participants and the therapist.
In non-clinical settings such as classrooms, Puppet Playback Theatre can foster class cohesiveness, cultural and diversity awareness, and socialization. The improvisational nature of Playback Theatre encourages development of language/communication skills, memory, problem solving, cognitive processing, and creativity. (Bernier, 2005, p. 111-112)

Bernier, M. & O’Hare, J. (Eds.) (2005). Puppetry in education and therapy:
Unlocking doors to the mind and heart. Bloomington, IN: Authorhouse.