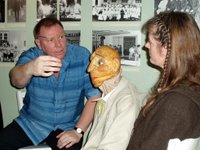 Fifteen participants, mainly Danish actors and teachers were involved in this two-day workshop last week at the Festival of Wonder in Silkeborg, Denmark. Neville Tranter, ex-Australian puppeteer, who has been resident in the Netherlands for the past twenty-five years, presented a workshop on his unique puppetry techniques. As a young person, Tranter was fascinated by Sesame Street and The Muppets, learning much of his technique of character presence in the television frame. The contact between the puppets and their audience held him and he adapted this technique to live theatre, viewing the world through the eyes of his puppet characters.

In the workshop, Tranter demonstrates the puppet’s articulation with a character he calls Zeno. Perched uncomfortably on his lap, like a ventriloquist dummy, Zeno’s piercing emotive eyes react to every move of the puppeteer. Each movement ends in a still pose, which the audience takes in. When the puppet moves, the actor must keep still, so as not to distract from its action. The eyes are always attracted to movement. When the puppet action ends, it can be continued by the actor, which gives a continuation and strength to its movement – a constant rhythm, like a dance.

An actor showing emotions in slow-motion may be melodramatic, but not so with the puppet. It can take its time to exaggerate an emotion and action. Tranter thinks in archetypes to tell a story. In his production of ‘Hitler’, he used the children of Goebels represent innocence, as a balance for dramatic work on different levels. He carefully chooses only the characters necessary to tell a story. He always uses one character to represent innocence, which plays off the other characters. It took him a long time to begin to play the role next to the puppet, which he couldn’t at first compete with, so he kept silent.

Everything he does with the puppet is very intimate and experienced close-up. The puppet’s character is always only an arms length from him, as he plays both actor and puppeteer and is extremely close-up. He likes to explore the relationship between the puppet and actor, which is dominant, and to fully explore all its possibilities. The same puppet can often take on different voices and characteristics, but movement is basic and often precedes the voice.

Breathing gives rhythm to the whole body and the movement and sound should correspond to its breathing. The students in the group are completely focused on the puppet, as each tries out some movement possibilities. The eye focus is demonstrated as the puppet head moves in direct line to an object, then holding a stillness and focus, keeping the emotion, and finally turning back to its original point of focus.

Tranter defines the movement as the constant pushing and pulling of the character by its environment. He demonstrates the double-take, where it reacts twice to a stimulus. When the puppet movement is continued after the sound of the breathe stops, it gives the puppet a stronger credibility that it’s actually breathing itself.

The puppet demonstrates an almost atavistic sense of natural movement, without over-intellectualising its character. When the puppet wants something, he is attracted towards it and thinks how he can achieve this. When it needs help, the puppet finds a way to attract the actor into assisting him. This we see in its body language, giving an intensity of expression that puppets do so well. We see the movement of the puppet sitting on the actor’s knee, when one character takes over the movement from another or copies a movement of the other, which takes on a dramatic or comic effect.

In his opening performance of 'Frankenstein' at the Festival of Wonder in Silkeborg, Denmark in November, Tranter aptly demonstrated all these devices and captured the dramatic moments so powerfully in the ambiguous relationship between love and hate, reflected by the way he portrayed the relationship between the old doctor and his abused imprisoned daughter. It’s the classic tale of the scientist who destroys himself through his own creation.

Watch out for Tranter’s new production of ‘Vampire’ which opens in the English version at The Schauspielhaus in Vienna in April 2006 (see www.schauspielhaus.at)
(Article edited)