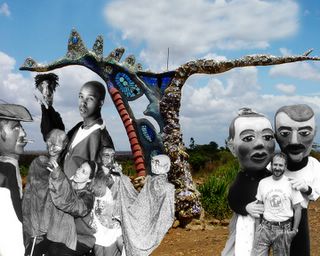 In September 2005, Gary Friedman will launch a lecture tour of the United States, Canada and Europe, discussing the role he has played in promoting puppetry in education and development in Africa and internationally over the past twenty years.

Some of the programs he will illustrate and discuss include: Puppets Against Aids; Puppets in Prison; Puppets Against Apartheid and Puppets for Democracy, all issues, which have played an important part in the social change and political struggle, throughout Africa and other developing countries over the past decades.

He will specifically be focusing on the following two themes in the presentations:

1. Puppetry in International Education and Development
Puppetry has been used to communicate social, health and development issues to communities all over the world. This workshop will discuss some of the projects he has personally been involved in throughout Africa, Europe, North America, Australia, as well as many island communities to put across difficult and culturally sensitive messages such as Aids, Corruption, Drugs, Sex Education, Abuse and Democracy. Many of the projects have been filmed and short video clips will be shown and discussed, explaining how puppetry was used to bridge the communication divide in our modern world.

2. Politics with Puppetry
The history of the oldest art-form in the world didn’t start as an art. It began with the religious function with the ancient shamans in our primitive culture. Puppetry played an important communication role through history, from the political Punch and Judy attacking the monarchy, in the streets of England in the 18th century to the modern day use of puppetry in modern day fights for freedom. From the religious to the political function, from the social and educative function, we will look at how puppetry has played an important socio-political role in many societies in the world, from early history until today. Show personal examples of the political work Gary has done will be shown, from “Puppets Against Apartheid” in the nineteen-eighties to “Puppets for Democracy” in the nineties.

If you are interested in further information about this lecture tour, programs or country schedule, please contact us or watch this space for regular updates!
Posted by Gary at 15:55